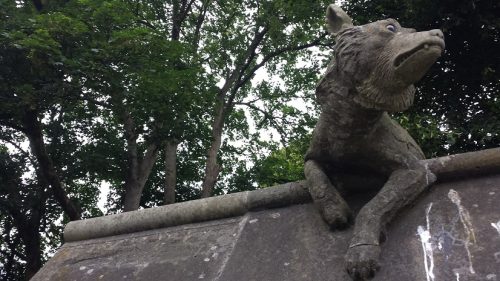 Whenever you finally get to a place you’ve always wanted to visit, you 1. spend as many days possible there and 2. try to fit in as many adventures in as you can. Without doubt you can guess what happened when I got only one day off from my work trip to spend in Wales! Here is what I came up with to savor as much Welshness as one can take in just eight hours…

About this tour: The great thing about this day-tour is that you flexibly can decide yourself whether you’d like to take the bus to Castle Coch just outside Cardiff first and then walk back or the other way around. Taking the bus there and back is also a possibility. But, seriously: That’s cheating! 🙂

So many Castles – and so little Time!

Those of you who have been reading my blog for quite some time now do know that I love doing many different things and especially when I’m on the road, I am rather the active and round-and-about type. Still, there is certain experiences I want to include in any of my trips to really be able to enjoy them: Being outdoors a lot and getting to know all about the place’s past and (political) present. With only one day in the capital of a country that is mostly known for its natural beauty, rich history and endless supply of castles and ruins alike, you will clearly understand my dilemma: Where to start and what to choose? 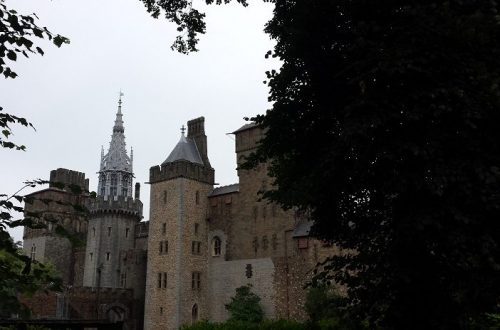 Cardiff Castle is waiting for you!

Where to stay? I recommend the Riverhouse Backpackers Hostel

So here is what I did: I booked into the Riverhouse Backpackers Hostel which is only a few minutes from Cardiff Main Station and right at the Western Bank of the River Taff. You get there easily from Cardiff airport with the Shuttle. As it is a regular bus (Line 9) it’s only 5 Pounds to the main station. I can clearly recommend the Backpackers. It’s clean, accessible and offers an excellent breakfast. The downside is that it is pretty crammed, especially on the weekends. But this is the case with (almost) all British city hostels. From the Riverhouse Backpackers you can get to the park entrance of Bute Park next to Cardiff Castle in just five minutes.

Two Birds with one stone: From Cardiff Castle to Castle Coch

When I set out for my extended walk along the Taff River I fortunately was not too distracted by the amazing Cardiff Castle sitting right in front of me at the beginning of the tour: I did the Cardiff Ghost Tour the night before, so I already had seen the huge area within the impressive walls in the late evening gloom. Also, it’s really a treat to know there is another castle waiting for you on your way back – be it on foot o by bus!

On the Taff Trail – By bike, by bus or on foot!

The Taff Trail actually is a cycling route of about 90 km (55 mi) running from Cardiff to Brecon and boasting several real highlights. The section you can easily walk from Cardiff city centre and enjoy some Welsh nature so close to the capital is only about 15 km in length and comes with nothing less than two spectacular castles!.

The whole walk/hike will take you about 2.5 hours when walked straight. You’ll see a lot of beautifully groomed flowerbeds, hedges and lawns, but also some almost untouched sections of river bank along the way. Apart from two little exceptions the whole path is paved, so you could also go by bike or skateboard.

The last twenty minutes of the walk will also be the most strenuous as you’ll be climbing up to Castle Coch. This castle is one of the many examples of John Patrick Crichton-Stuart, 3rd Marquess of Bute’s projects. The scholarly and withdrawn heir to the Bute estates is remembered and admired as one one of the greatest private patrons of architecture in all of Britain.

Both castles have been rebuilt and redesigned by eccentric architect and visionary William Burgess. And while the more famous of the two, Cardiff Castle, has way more to offer in terms of history and significance for the country of Wales, I found the smaller Castle Coch the one which made my thoughts wander and imagination take over. While parts of the castle keep have been built by the Clare family as early as the 13th century, the castle today has not much more in common with its first predecessor than its foundations. Most of the three towers of this first castle were destroyed in the 14th century already and there were mere overgrown ruins left when Bute and Burgess started their project in 1875, bringing a fairytale fortress to life.

All in all, Castle Cobh is absolutely worth its 9 Pounds admission, but make sure you bring some time to enjoy it! I spend over an hour wandering the rooms and walls of this magical castle with its impressive but playful ornaments. My absolute favorite was the ceiling of the drawing room, painted like the morning sky with a blindingly golden sun in its centre. What will your favorite place be?

In case you’re a little hungry or just tired after your walk to Castle Coch, I also can recommend the Tea Room at the Castle which is open at least on the weekends, serving nice Welsh bakery and deliciously strong cappuccino. (cake and coffee for together about 3.50 Pounds).

Conveniently getting back to Cardiff

As I’ve said in the beginning, the great thing about this tour is the public transport connection. From Castle Coch it’s only about 15 minutes back down into the village where you can catch the Bus (Line 132) and get back to Cardiff Castle in about 25 minutes for about 2.30 Pounds.

Before you go on your second tour this day, you might want to take a little brake and tick off another important point on your Welshness-List: Have a pint or two, possibly with typical Welsh/British Food. I chose one of the older pubs close by, the Old Arcade between High Street and Church Street which boasts to host the oldest “Rugby Fan Club” in Cardiff. Make sure you got some cash on you, the local brew “Brains” offers a delicious variety of different locally brewed beers and stouts!

Your second Highlight of the Day: Cardiff Castle

Cardiff Castle now boasts an extremely rich history which clearly will not fit into this one article. Initially founded as a Roman Ford it was rebuilt and expanded after the Norman Invasion of 1066 – the Welsh like to believe by William the Conqueror himself! Again it was the Bute family whose wealth and dedication to exquisite architecture saved the Castle and its huge areal. To really see everything there is to see and also take it all in, you should at least stay for one and a half hours. As an arabophile book lover, my favorite rooms clearly are the atmospheric library and the stunning lushness of the “Arab Room”, but there is so much more to see and admire.

Did you find this article helpful? Did you try and enjoy the tour? I’d love to hear from you to make my tips and tours even better!

And…When do you dare?