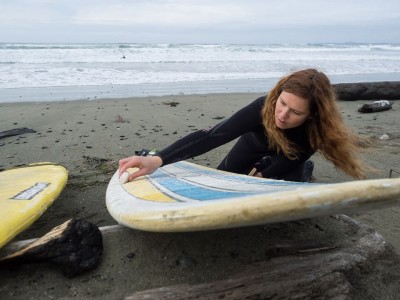 Thinking of surfing, you might imagine palm treess, crystal blue water and tanned beach chicks. Well, when I think of surfing, I dream of rough waves, lush Douglas Fir and Sitka Spruce along the coast line and an outdoor shower, covered in dangling icicles. Clearly, my idea of the perfect surf spot and day may seem a bit odd – at least for those who have never been out there in the winter waves. You might think differently though, after you’ve heard the whole story…

As long as I can think back, I’ve always wanted to surf. Travelling all over the world with my parents I watched the most awesome sport I could imagine from the beach. Later on, I swam out as far as I dared, to get a better look. But to finally try and hop on a board myself, I had not only to get as old as twenty-seven, I had to fall madly in love: with Canada’s West Coast.

Why and where I love to surf in winter: Hop on and enjoy the ride!

Goats, Giant Trees and even real Giants – All on the Road to the end of the World

It is late November and you just arrived at the end of the world. Literally. Vancouver Island is located West of Canada, next stop: Japan. And there is only one road taking you even further West to the Pacific Rim National Park. No matter when you left from Victoria or Nanaimo to get there, you’ll arrive in the pitch dark. About three hours earlier you got off Highway 19, somewhere near Parksville towards Port Alberni, only to find yourself on a road that google.maps does not consider important enough to give it a color. First, you almost rick your neck, because you thought you saw a goat on the roof of that country market. After finding out there indeed is a “Goat on the Roof” you stuff yourself up with awesome Italian ice cream at the Market and visit the goat’s friends, living all over the property. Then, you drive through Cathedral Grove, boasting some of the oldest and tallest trees in the world and decide to make a quick stop – which lasts full two hours.

Back on the road, you enjoy the most amazing views when driving along the Clayoquot Plateau. You can’t and shouldn’t resist a sunbath on the river bank to dip your toes into the icy waters. Now, the road creeps along the mountain side, winding back on itself. You might start wondering now where all this will take you in the end. If you’re lucky, sun and rain will both accompany your journey, because only then you will witness the fog rising magically from between the tree tops behind Kennedy Lake, lingering there as if a huge giant was smoking his pipe. All of a sudden, the sun sets and dusk is on you faster than you can say: “Almost there.” This is when you end up driving the rest of the serpentines after dark, trying to focus on the guardrail in the dim beams of your headlights.

When you arrive at the first junction after your three to ten hour drive, it doesn’t really matter much which way you turn. On your left, you’ll find a little town with the apparently unpronounceable name of Uceluelet (speak: Youclulet), called ‘Ucee’ by the locals. On your right, you’ll drive about 50k to the hippie-tourist-town of Tofino. But in between you and Tofino, there is only beaches: Schooner Cove, Rosie’s Bay, MacKenzie, one more wondrous than the other in its unique West Coast beauty. Well, and then there is the endless, sandy surf beaches. At some point or the other any surfer here – beginner, local, pro, no matter – picks a favorite beach, one to make his or her own. When is the high tide at Chesterman South? How big is Cox today? Regardless whether it’s your day off or not, you’ll have a peek on the local surfcams in the morning. Every. Single. Day. Just in case.

An almost untouched coastline with forests of Sitka Spruce, dripping moss and gigantic otherworldly ferns is stretching right down to the white sandy beaches. The Pacific Rim National Park feels untamed, even wild. One day on my way to the beach, a pretty well-fed black bear was sitting in the middle of the road to the parking lot. Cougars, deer, elk and bears – out here they sometimes are just an arm’s length away without us even noticing. They hide in the huge ferns and thick undergrowth and usually you don’t get as much as a peek. But they are out there, here in paradise.

However, it’s November in paradise now. If you’re smart, you put on your wetsuit in your warm and dry living room, then hop in the car to get down to the beach. From the parking lot you might want to jog down to the dunes to have a quick look at the waves. Rarely you’ll find nice, little rollers with a clean break there. But be assured you’ll get some powerful waves further out almost every day throughout wintertime. To get there, you usually have to plow through a mess of white foam and random brakers. Especially for beginners, this is not a place for toe dippers. But believe me, it’s worth it!

Before you run for the best waves, just turn around first. In case you are at Wickaninnish Beach, you’ll see nothing but dunes, driftwood and trees with some gorgeous mountains in the background. ‘Wick’ is clearly my ‘chosen surf beach.’ At the far end of beautiful Long Beach, most surf tourists don’t do the 40k-trip from Tofino and rather go to the beaches closer from there, like Chesterman Beach. (Outside Magazine considers Chesterman “one of the best beginner breaks in North America.”) The local pros on the other hand, usually find the waves at ‘Wick’ too small, even in winter, when they easily come up to 10 feet here. At‘Wick’ you have high chances to enjoy the best about winter-surfing in Canada: Not only in my dreams have I been the only person in the water – for hours on end.

So where can you find the locals, then? In summer, they’ll be out as early as possible, at Long Beach or my other favorite spot, Cox Bay. Almost year round Cox serves you with huge, crashing waves and an almost magic coastline of black, steep cliffs and deep-green conifers, big-leafed plants. The beach is well-known for its spectacular storm watching at Pettinger Point – and this is exactly how surfing there can be on some days. In winter, you can marvel at the real pros out there on waves as high as thirty feet. In any case, the crescent of Cox Beach is a beauty in itself and especially in summer, it’s awesome to hang out there with friends to catch up, play music – and surf.

Feel alive – at the end of the world!

In case you made it to Pacifc Rim some time between November and February though, you can experience the place very differently from that bonfire atmosphere. Ever since number 4 was paved in 1971, the “highway” has constantly been improved. And even though the drive still feels adventurous, throughout the summer months you’ll find countless camper vans and even small buses on the road. Tofino simply is the ‘not-so-secret-anymore secret-spot’ on the West Coast. Hotels and hostels are packed and you’ll find no camp site without a crowd of partying UBC students next door.

But when the first snow finally blankets the parking lot, you’ll share the water only with those who burn with love for this ocean. And after a couple of weeks, you might earn an acknowledging nod and a smile from the locals, like the owner of Long Beach Surf Shop, whose home spot is ‘Wick’. Wisps of your won breath swirl around your face. The boardwalk to the beach is covered with frost. You run down to the lapping waves, slither on your board and start to paddle. The air is crisp, the world around you smells of salt and seaweed. You are all by yourself when the first icy breaker hits you with full force. The cold cuts through your body, sharp as a knife. Your heart starts pumping and you finally feel truly alive. Just you, the ocean – and the end of the world.

Recommended music for the trip:

Driving in the day: “Into the Wild,” Soundtrack by Eddie Vedder.
Driving at night: “Wagon Wheel,” song by Old Crow Medicine Show.
Driving to the beach and to play in your head while on the board: “Coastline Journey,” song by Mishka.

Read more about the West Coast and its people in this amazing story “People of the Wild” about wildlife and nature photographer Owen Perry (by Supernatural British Columbia.)

Schooner Cove, Way to Ucee and Surf pics all by Lorenz Jimenez Photography. All rights reserved. 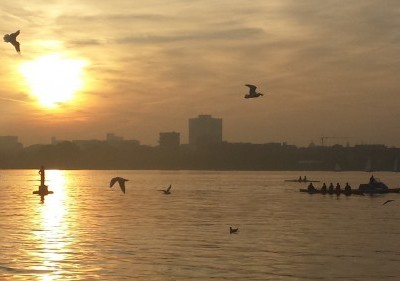 Whenever I come to a new city, no matter for how long, first thing I do is to go exploring. Either I take the bus, go for a run or for a really long walk. This weekend I moved to Hamburg. Guess, what I did? Come with me on one of the nicest Sunday afternoon walks the big German cities have to offer – walk around the Außenalster with me!