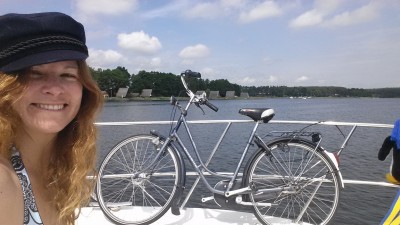 What a brilliant start to this summer: It’s just No.1 on my summer bucket list and I’m in love. She is 13 meters long, with a roaring diesel engine and her name is, how fitting, “Aphrodite”. As a real Captain of my own ship I am prepared to cruise the Havel river north of Berlin – all thanks to the amazing people of RevierCharter. Read about the magic of reverse on the water and why you might need some sausages to become a really relaxed captain!

RevierCharter houseboat rental is merely one hour drive from downtown Berlin and a real alternative to any other summer activity in Berlin. With enough time on your hands you may even end up right in the middle of everything, next to the “Kanzleramt” and Parliament, cruising along the Spree!

Welcome to Germany: A license for everything

Helmstand, bow thruster, bilge pump –after the first ten minutes I’m already having a hard time to wrap my head around all of the new terms, instructions and good advice given by Isabell, the owners’ daughter. Right then, I am again so happy to have two of my oldest friends with me taking the course. Hopefully, they’ll remember everything that I don’t, when the time comes. Finally, we give it a first shot and start the engine. Our instructor Marcel guides me out of the tiny harbor. Struggling with the wheel, and the sheer size of the boat, I’m trying to figure out how to control speed and maneuvering.

To be fully honest with you, steering a boat is pretty much like driving a car – but without the brakes. So at first everything is kind of easy-peasy at first, but gets pretty interesting when you’re trying to enter a water gate which is just as narrow as your boat is wide. Sometimes it’s not really That bad that you need a license for everything that is fun in Germany. (almost. Marital intercourse is not on the list, yet). But then, you also need a good sense of proportion and a couple of deep breaths for your first maneuvers.

The most important thing about a big boat is to know how to use the reverse to slow down and stop the beast. What then becomes really tricky is to understand which way the stern turns when in reverse and using the bow thruster. Lucky me to have a chief mate on board who’s also a pro-hobby tractor and trailer driver. With his tips I figure out how to turn the boat and together we actually make quite a good team!

Soon enough we get the routine and can really feel that there is something meditative about boating. On our second day – already feeling the Kings and Queens of open waters – we arrive in the line-up for one of the major water gates round Berlin. It’s a hot summer day and the whole crew is in their bathing suits already. We’re pretty sure, it’s about two full round back and forth until it’s our turn. We cast the anchor at the end of the line-up somewhere in the lake and hop into the lake’s refreshing waves.

When in doubt, have a BBQ!

A lot of splashing and fun and pictures follow. Until the “captain” next to us stars shouting: “You are moving! Don’t you know anything?” Well, of course we are, just like everybody else in the line-up, anchoring, engines turned off. The crew on the other ship is dandified in smart sailing garments, six of them, three couples well in their fifties. Usually people out here, especially anyone this age, is so deeply relaxed and friendly that we are kind of speechless right now – Until we realize that our new neighbor simply had outmaneuvered himself.

Obviously he had tried to cut in line and get ahead of us by squeezing himself and his, also quite enormous, houseboat between our anchored “Aphrodite” and the shore – betting on a swift progress. Too bad for him. He had nowhere to go now, even anchoring was impossible, cause he might just drift against our beautiful ship from there. The only thing left for him was to keep correcting his boat the bow thruster, a strong and very loud rudder right underneath the front.

So, this is what we did then. In the middle of the watergate line-up, all of us absolute newbies with this boating thing, we fired up the BBQ grill on deck. We set the table nicely, and had awesome steaks and sausages right under their noses. We relishing the salads and sauces still wearing our bikinis. Three pairs of very large and obviously hungry eyes kept watching us, while their captain was focused on his bow thruster, loud and annoying for the line-up crowd, but a lot of fun for us.

“Get aboard and leave your sorrows behind”

This is how one of the huge cruise companies might advertise their unbelievably expensive cruise packages. For sure there is some truth in it – at least when you are your own captain and are able to let go in the end. After the first hours of frantic steering, correcting, and outright panic at the first watergates you discover the quiet of the lake and river, the quiet in you. Especially with your hands on the wheel you gradually slide into a kind of meditation mode where it’s just you, the ship, the water. Just make sure you got three things with you: Your captain’s hat, an awesome crew and enough meat and sausages for your watergate BBQ!

What is this blog about? Find out more..

2 thoughts on “Do you dare – to be your own Captain? It’s Summer in Berlin!” 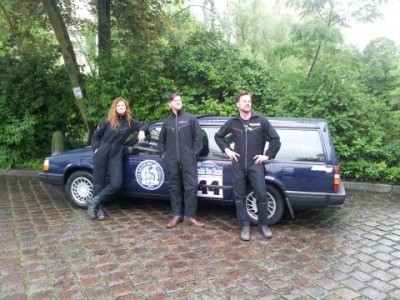